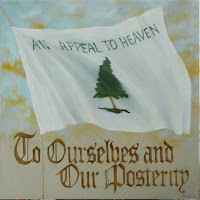 I just finished (well almost) another painting for the American flag series. This flag and its variations were flown before and during the American revolution.

This 4'x4' painting finishes the collection that has the Preamble to the Constitution as part of the art that goes with each painting of the series. I may have to make some minor changes to the size and color of the type that says "to ourselves and our posterity" but at least people can get an idea of how this painting is shaping up. I also may have to take the "An" off and change it to read "Appeal to Heaven". My research indicates it has appeared both ways but "Appeal To Heaven" seems to be a more accurate version because it implies an ongoing imperative versus a singular event that "An Appeal To Heaven" seems to indicate. I will have to find out more before all the paint dries.

What an interesting time in American history this flag represents. The Flag's origins began when a group called The Son's of Liberty would rally under a large Pine tree, in Boston
Massachusetts, which came to be known as "The Liberty Tree". This tree became a visual symbol for the emerging American independence movement in Boston. These increasingly vocal patriots would gather under this tree knew their yearning to break away from England would only tighten England's grip on them. So the flag with the tree represented independence but because The Sons of Liberty also believed that they were sustained by a much higher power than England, it was very important to them to add the "Appeal To Heaven" motto on their flag. By the way the motto comes from John Locke's second treatise on Civil Government.

The "Appeal To Heaven" flag was flown on George Washington's private squadron of six schooners which he outfitted at his own expense in the fall of 1775. The flag was hoisted first on Washington's ship Hannah on September 2nd 1775. These schooners were the first ships in the emerging continental navy and were commissioned by the Commander in Chief, George Washington.

The Massachusetts General Court established that a flag for the state navy was needed and adopted the "Appeal To Heaven" flag on 26 of July 1776 to make it official.

Their are multiple versions of this flag existing today but because the original was captured by the British and destroyed we really are not sure exactly what the first one looked like. I think I am pretty close though.
Posted by Steve Berger at 8:45 PM No comments:

As I work on President Washington's painting with his personal flag I thought I would post this watercolor of soldiers at Valley Forge also. The cannon and uniforms were fun to research for accuracy, (note the design on the pack of the one soldier). I intend to do another painting similar to this one but from a different angle and with a flag somewhere in the picture. I would also like to add horses and a fire in the picture with the painting showing the same place just later on in the evening. Makes me cold just thinking about it. This print is for sale just email me if you are interested in it.
Posted by Steve Berger at 11:17 AM No comments: 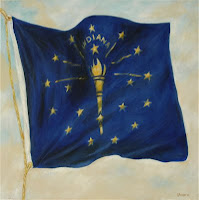 My newest state flag is done. This 2'x2' acrylic on canvas features the great state of Indiana's flag. Like many other state flags the original design of the Indiana State Flag is the result of a design competition sponsored by the Society of the Daughters of the American Revolution, at the behest of the General Assembly, during the state's 1916 Centennial celebration. Two hundred proposals were received and examined.

The winning design by Mooresville, Indiana artist Paul Hadley was adopted by the Indiana General Assembly with an effective date of May 31, 1917.

I feel this flag is branded well. Even though it takes a little explaining it all makes sense. Like most state flags they all tell a unique story. I am really amazed how active the Daughters of The American Revolution have been in the past to ensure that all states have thier flags.

This flag as well as other state flags that I will be painting over the course of the year now have a home on the www.bergerfinearts.com website under state flags. Of course I will post as soon as I finish.

Posted by Steve Berger at 12:48 PM No comments: