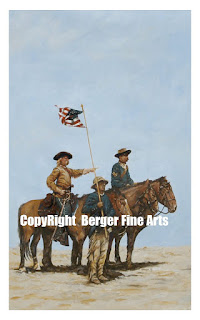 This is the final painting in the Little Big Horn series. This painting shows General Custer and Scouts signaling his commanders to follow him into the Bighorn valley. Note the one scout has buckskin trousers on and Custer is also wearing buckskin. According to eyewitness reports on finding the remains at the site soon after the battle Custer was found with all his clothes intact and wearing the buckskin jacket shown here and shot two times both wounds were deemed fatal. According to Chief Crazy Horse who was eyewitness to the event when General Custer was shot for the final time as he fell he laughed. Makes you wonder what the general was thinking about at the end of the battle. It took roughly forty minutes for Custer to have his command annihilated. The rest of his force under the command of officers Reno and Benteen would fight for the next two days before being relieved by reinforcements. This painting is available in prints and original image size is roughly 20" x 36" . Full size Giclee prints on canvas are available for $250.00. Contact steve@bergerfinearts.com for orders.
Posted by Steve Berger at 8:55 AM No comments: 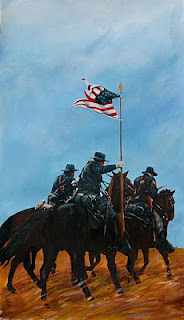 This is another painting about the events at Little Big Horn in 1876. There will be one more painting in this series that I have finished and will post later today. This will complete the set at four paintings. This painting is titled "The last Charge of the Seventh Cavalry". Image size is roughly 22"x 38" and was purposely painted with a darker sky and images than the other paintings of the series. I wanted this painting to convey a feeling of static energy being poured into an abyss of history. Whew that is statement that needs to be looked at again. At any rate watch for the last painting of the series. Giclees of this print on canvas will be offered at $250.00 each with artists remarked touches.
Posted by Steve Berger at 8:30 AM No comments: 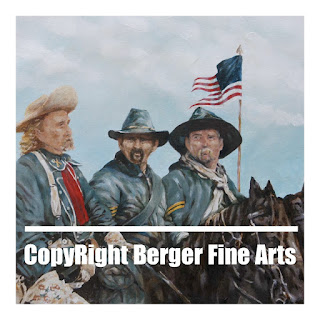 I admit as a historian I find the the 1876 battle of Little Big Horn fascinating for a number of reasons.

Maybe it's Custer's arrogance or the Sioux nations last gasp of independence that makes this moment in time so intriguing to me but it was most definitely a defining moment in the American West.

This painting called "The Decision" represents Custer's order to split his forces at the divide of the Rosebud River and the valley of the Little Big Horn.

Why he did this is for historians to argue over but it lead to the elimination of his command and the beginning of the end for armed native American resistance.

This painting depicts the conversation at that moment. I wonder what his junior officers thought as he gave the order to proceed and attaack the large Indian village that they could see across the river. His troops were tire and dusty they had just finished an 18 mile ride and it was just a little before 12:oo on that fateful day in 1876. What were they thinking?
Posted by Steve Berger at 9:39 AM No comments: 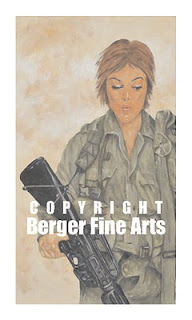 This is a new painting that I had been thinking of for some time. I want to add some finishing touches but at least I am started and it is out of the sketch format. With memorial day just passing this one is for all the mom's in the military and there seems to be a lot of them.

I never seem to see any images that can convey all the loads women carry as mothers, wives, and soldiers. In this painting I wanted to capture that feeling. Maybe this painting represents the end of a long long day somewherere else but home.