I recently finished the color version of Custers Personal Battle flag made for him by his wife Libby. You can see my earlier post where I talk about the history of this flag and how it has been misrepresented. Because Custer had a problem with authority he would also go against military formalities like proper uniform dress codes. He is pictured with a red tunic and a naval light blue shirt.

The flags colors are derived from the actual flag that was auctioned off to an investor by Custer's nephews 75 years after the Little Bighorn. A photo of this historical flag was shown before the auction to potential buyers. The original showed ragged ends and obvious wear.

This 14"x19'' acrylic painting on canvas is for sale. A limited edition print run will be produced and posted here or at my website. If you are interested in this painting or any other work please email me at:
steve@bergerfinearts.com
Posted by Steve Berger at 3:17 PM No comments:

The Other Virginia Flag Painting 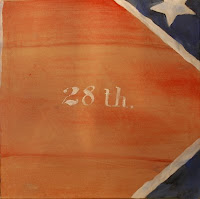 Well here is the newest painting of the 28th Virginia Infantry Division's flag captured at Gettysburg on July 3rd 1863. It is the other side panel of the flag that features the "28th" printed on it. The two paintings are meant to be seen together side by side. I may in the future paint the entire Virginia flag. There are some Minnesota 1st regiment flags that I would like to capture next.
Posted by Steve Berger at 3:26 PM No comments: 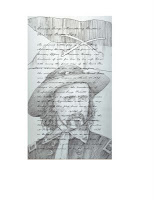 In doing my research for George Armstrong Custer personal battle flag I noticed it was recently auctioned off in Dallas Texas. This gave me an opportunity to see the actual colors, dimension, and design of the original flag.

Every graphic representation that I could find of this flag (and there are a lot of them ) in books, flag supplier catalogs that offer replicas of the flag and reenactment activities held at the Little Bighorn where battlefield enthusiasts carrying the Custer Flag all are depicting an inaccurate representations of the original Custer Flag. The colors and design of the flag when compared to the original are all wrong. Its a shame that the people who do the reenactments who are trying to be as accurate as possible with uniforms and dress of the times are not aware of this inaccuracy.

This flag's history is of course as colorful as it's bearer. His wife libby hand sewed it for him in the final days of the Civil War and was personally delivered to him on the battlefield in the midst of battle at Dinwiddle Court House near Petersburg, Virginia on March 31st 1865.
It was with General Custer at Appomattox where he witnessed personally Lee's surrender of the army of Northern Virginia.

This is one of the most important flags in American history and it should be shown accurately. It was passed on down through the Custer family, and was preserved by his relatives from the Custer farmhouse in Monroe Michigan. The flag was later purchased from his nephew Lt. Col. Charles Custer just 75 years after it last flew above General Custer himself.

I will be painting this flag soon and will post it and offer it for sale as soon as I finish. Watch for it on follow up posts to this blog.
Posted by Steve Berger at 3:15 PM No comments: 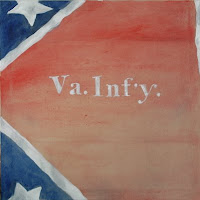 I recently had the opportunity to view the Virginia Battle Flag captured by the 1st Minnesota Volunteers at the battle of Gettysburg for a painting I am doing of it. This historic flag is being very well kept under the care of Matt Anderson of the Minnesota Historical Society. Matt was very helpful on filling me in on the history of the flag, he definitely knows his stuff.

When looking at the flag I discovered that the flag is in much better condition than I expected, some of the Minnesota regimental flags that were on display at the State Capital building were very faded and fragile looking and not nearly in the condition of the Virginia flag.

Matt also informed me one of the reasons that the 28th Virginia Infantry flag in his care is in such good condition is that the Virginians received this particular flag two weeks before the battle of Gettysburg. So it was almost new when Pickett's charge was initiated at Gettysburg on July 3rd 1863. I also learned that the type that announces that this is the "28th. Inf'y. is only on one side of the flag.

Being this close to a piece of American history is always exciting to me and it makes it even more meaningful when I paint my representation of it. The flag shows some small holes, tears and staining along with light fading of the color red all of which I hope to duplicate in my paintings as much as I can.

Attached to this post is a first color proof of the final painting. Watch my website and I will post it as soon as I have it finished. Prints will most likely be in the 2'x2' size.
Posted by Steve Berger at 8:27 AM No comments: 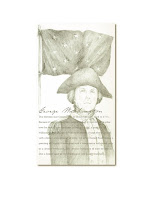 I am also working on paintings of famous Americans who carried personal flags. It was only appropriate that I start with the first president, George Washington. Actually he had two personal flags that he carried with him throughout the Revolutionary war and these flags went everywhere with him.

The pencil sketch shown here will be later turned into a painting. I just have to get my ideas for the painting down on paper one of which is to show a much younger Washington. This is the way I imagined him to be during the war years. I have not seen many depictions of a young George Washington in military gear so this will be my perspective.

The flag featured in this sketch is what I believe was the first and his favorite personal flag. From what I can gather this is the one he had carried at Valley Forge when the Continental Army was at a particular low point so it was with him when things were the roughest. I am still researching other paintings that show the correct color of this flag and I think I am getting closer to finding an accurate color. What I did find makes me believe that the flag was a light blue with white stars. This light blue was prevalent in a lot of French flags of the time and its a good bet that it was popular with the American colonist also. A painting by William Mercer (Battle of Princeton) shows a large blue standard with this particular arrangement of stars.

The alternate flag showed a circle of stars much like the Betsy Ross flag only without the stripes. There was an artist of the time named Peale that shows a blue that was much darker for this flag. Washington's "Life Guards" the predecessors to the modern day Secret Service used this particular standard with the circular star pattern as their identification mark.

I am also finishing up a General Custer sketch that will feature his personal flag in much the same style as this painting. Watch for this one soon. A real interesting history to this one.
Posted by Steve Berger at 12:43 PM No comments: 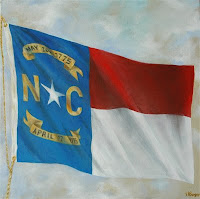 I just finished painting the North Carolina flag. A very interesting history and a lot of variations happened to this flag over time. The first design submitted by Colonel John D. Whitford on the day of May 20 1861, on the date of the succession resolution and signed by North Carolina was never actually used. That is of course why I would like to paint it so look for this one to show unannounced sometime in the near future.

Soon after the first design was submitted Colnel Whitford and his committee got enough feed back that they felt it was necessary that they consult an artist from Raleigh by the name of William Jarl Brown. Mr. Brown submitted his design which of course was totally different than the original design done by Colonel Whitford.

The dates on the current flag stand for two important dates in North Carolina History. The top scroll above the star has the date of the Mecklenburg Declaration of Independence but the date displayed on the lower scroll relates to the date of the "Halifax Resolves" April 12th 1776.
Posted by Steve Berger at 12:03 PM No comments:

In searching for some information on other historic flag blogs I came across an interesting link listed below. It talks about how there are not a lot of historical flags remaining to actually see what colors were used and what they looked like. Most are going by descriptions and old drawings from papers and cartoons of the time. At any rate its a start, here it is:
76 flag (historical United States flag)
Posted by Steve Berger at 10:05 AM No comments:

March 7, 2009
This is my first attempt at blogging so I am not sure there is a right way or a wrong way. I wanted to have a place to show new art for people who have purchased art from me in the past and just wonder what I have been painting as of late.

The United States flag project will occupy a lot of my time in 2009. I recently finished the South Carolina flag and the Minnesota flag, which the Minnesota flag was extremely complicated and could not get the file small enough to post on this site. I will continue to accurately portray through research original designs of each state flag. It is truly amazing how flags change their looks over the years. Its like someone keeps taking a Xerox copy of a Xerox copy over and over again until you finally get a blobby looking glob for art that gets sewn on a flag. I will write more about flags later.

I hope to fill in with branding and Identity projects the rest of the year in 2009. With this economy its nice if you can just keep busy. If I get lucky maybe I will get some cartoons to draw this year also.
Posted by Steve Berger at 11:01 AM No comments: