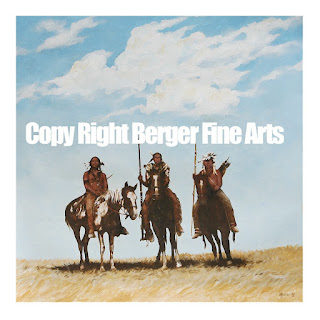 This is a recent painting I did to go along with the Fort Snelling painting "series" which I have not posted here yet. The series depicts different scenes about the post as it appeared in 1848. Of course the Dakota people were a big part of the comings and goings of the settlement. This scene shows three Dakota warriors observing from afar. Just enough detail in the painting to evoke the distance between the two cultures the openess of the territory, both represented in this painting with the big sky and open prairie. Notice also that the sun is positioned to cast short shadows representing high noon on a hot summer day in northern Minnesota. I am sure this scene was played out many times in the 1800's, it was fun to paint while thinking of how it must have been to be alive during those days. This original of this painting is roughly 3'x3.5 and 2'x2' Giclee signed canvas prints of this painting sell for $195.00. Free shipping of course. Email steve@bergerfinearts.com to order.
Posted by Steve Berger at 1:50 PM No comments:

Bennington Flag Real or Not? 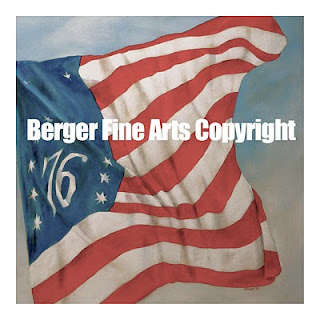 This is another 4'x4' painting for the American Flag series. I did a smaller version of the Bennington flag but I wanted to do a larger one for the collection. The history behind this flag is interesting. The Bennington Flag large '76' makes it easily identifiable as banner from the American Revolution, and it seems every one has seen this flag at one time or another.
A legend claims that the original Bennington Flag was carried off the field by Nathaniel Fillmore and passed down through the Fillmore family, and was, at one time, in the possession of President Millard Fillmore, Nathaniel's grandson. Philetus P. Fillmore flew a Bennington flag in 1877, to commemorate the Battle of Bennington. Mrs. Maude Fillmore Wilson donated the family flag to the Bennington Museum. Because of the family association, the flag is also referred to as the "Fillmore Flag".
Many doubt the actual use of the Fillmore flag at the Battle of Bennington. The flag of John Stark's Green Mountain Boys is generally accepted to have been there, but the Bennington flag has become more strongly associated with the event. Both Stark's flag and the Fillmore flag are held in a collection at the Bennington Museum, but the Stark flag is accepted as an 18th century regimental banner, while the museum has dated the Bennington flag from the 1800s based on the nature of the machine-woven fabric it is made from.The curator of textiles in the Smithsonian Institution's National Museum of History and Technology speculated that the flag may even have been a centennial banner, made circa 1876. If this is true than this flag is historic but it represnts a different era than what people think it represents. I will go with the Smithsonians observations. 2'x2' Giclee canvas reprints of this artwork are available for $165.00 email steve@bergerfinearts if interested. Free shipping of course.
Posted by Steve Berger at 1:20 PM No comments: 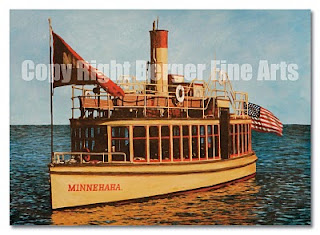 This is a painting of the wooden steamboat Minnehaha. This boat was built in 1906 and was powered by steam. It would cruise lake Minnetonka a suburb of Minneapolis all summer long. As personal gas powered boats became popular the ridership of the Minnehaha decreased and the upkeep became to much of a factor to keep the economics of the boat cruising the lake. The decision was made to sink the boat in 1926. She stayed on the bottom until the mid 1990's where she was discovered again and raised from the depths. She was miraculously restored and has been in active passenger service 1996. What a great way to spend an evening on the lake. It may be a little slower but in the middle of summer everything is suppose to slow down.
Posted by Steve Berger at 7:41 AM No comments: 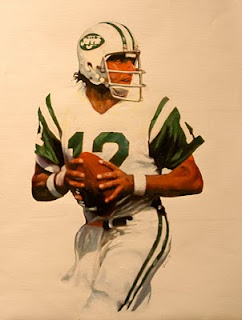 I am adding another sports painting that I recently finished. This one is of Joe Namath. Broadway Joe was a favorite of mine when he played for the Jets not the Rams. I had a chance to meet him on the field when he played for the Rams at the end of his career. This picture pretty well sums up how I remember Joe. Confident and in complete control of his game.

This 12"x18" print will be selling for $150.00 signed. If interested in this print leave a comment with contact information below or email me at steve@bergerfinearts.com and I will get back to you.
Posted by Steve Berger at 12:28 PM No comments: