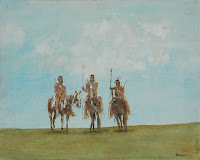 This painting is something a little different. I wanted to paint an image that represented the wide open west in the early 1800's. I feel this scene was witnessed many times throughout the upper midwest at the turn of the century. I like the feeling it gives me when I look at. Prints of this painting are available as well as the Bennington Flag that follows this post. Email me at steve@bergerfinearts.com if interested.
Posted by Steve Berger at 8:00 PM No comments: 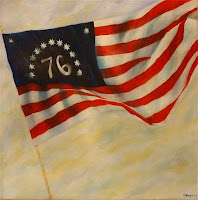 July 4th is next week and I thought it was high time I painted the most recognizable flag of the American revolution. The history of this flag is definitely interesting to me because of the differing stories about it's history. Note that this flag starts with a white stripe at the bottom of the flag versus the red stripe of later flags.

Many historians believe contrary to the Bennington family beliefs that this flag may have been made for the 50th anniversary of the declaration of independence in 1826. There is strong evidence to indicate a flag similar to this was present on August 16, 1777 when general John Stark and his "Green Mountain Boys" defeated 600 German mercenaries at Bennington, Vermont. I will have to do the "Green Mountain Boys" flag next.

The Bennington flag is sometimes also referred to as the "Filmore Flag". Nathan Filmore took such a flag home from the Battle of Bennington, where it was passed on through several generations of Fillmore's, including President Millard Filmore. The Filmore flag is now on display at the Bennington Museum in Vermont. The battle of Bennington on August 16th 1777 heralded a huge defeat over a large British raiding force that was after the continental military supplies stored in the town of Bennington Vermont. Historians believe that this was the turning point of the British success in America. This victory made possible the critical victory over the British General Burgoyne at Saratoga a short time later. Thomas Jefferson wrote in 1805 that the Bennington battle was the first key critical victory for a string of defeats for the British army.
Posted by Steve Berger at 7:23 PM No comments: 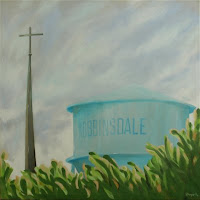 After looking about town it became obvious, the tall church steeple of Sacred Heart Church and the water tower that has been here as long as the town itself. I also wanted to tie in the many parks, lakes and baseball diamonds that make up the community without having to paint them in somehow. So I added the green grass in the foreground to signify parks. Painting an interesting view was next. To make the painting convey a feeling that while you have been walking you are now coming up to the crest of a hill and the first things you see are a church steeple and a water tower. You are tired, you need a rest and the day is almost done. Home is over the next hill. That was my intent anyway, I will have to see what the people of Robbinsdale say about it. Prints and the original are for sale. The original is 4'x4' and the colors in this post do not do the painting justice.
Posted by Steve Berger at 10:34 AM No comments: 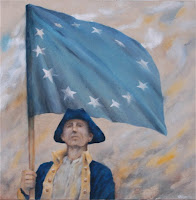 Even though there is ongoing research being made about Washington's Commander in Chief Standard/Flag. It most likely dates back to 1775. Because it was Washington's personal flag, it was with him wherever he went — saw the same action as he did. A painting by William Mercer (Battle of Princeton) shows a large blue standard with a linear arrangement of stars. the one shown in my painting is from a Peale painting of George Washington that shows a blue canton with stars, only in a circular formation. The circular formation of stars on blue is also a device used in the Washington Life Guard Standard. Washington's Life Guards were his personal bodyguards.

It is interesting to note that an unsigned and undated item found in the papers of General Anthony Wayne is a proposed design for the Seal of the Board of War and Ordance. It includes cannon, cannonballs, muskets, and Washington's Standard.

The standard is not large enough — or proportionate — to be an infantry regimental standard. It's rectangular shape and larger size do not really make it a canton either.

The original is in the historic Valley Forge collection, which was acquired through Washington's family.

The description of the "Commander-in-Chief Standard" which I have sketched (see previous post)but not painted yet is as follows: The field is a single width of faded blue silk about 27-1/2 by 35-1/2 inches. There are thirteen, large, six pointed stars with elongated rays. They are in a 3 2 3 2 3 pattern in layout. The stars are not clocked precisely the same; some are rotated from an exact vertical. The six pointed stars are "patterned" after English heraldic language. The flag itself was donated to the Valley Forge Historical Society from a descendant of George Washington.

All in all it is pretty interesting stuff and I would like to grab the kids and go to Valley Forge and see the real thing in person. I think I am pretty darn close to the look as I have it painted. I wanted to show a person with this flag to give it the appropriate scale.
Posted by Steve Berger at 7:54 PM No comments: