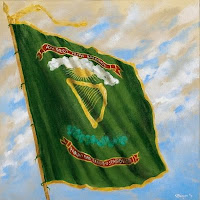 Here is a new regimental flag that I recently completed. All my Irish friends will say this one has been overdue. This is the infamous 4th Irish Brigade flag.N JULY 21st, 1861, at the battle of Bull Run Captain Thomas Francis Meagher of the 69th New York State Militia had his horse shot from under him by a round of cannon-fire. Meagher, that day acting as major for the regiment, sprang to his feet and shouted, "Boys! look at that flag--remember Ireland and Fontenoy."

The Federal army was badly beaten and routed but the Irish Sixty-ninth, an old pre-war militia regiment, had charged bravely and stubbornly held its ground. Even after its commander, Colonel Michael Corcoran, was wounded and captured, the Sixty-ninth as part of the rear guard retreated in good order while panicked Union soldiers swarmed around them. Union commander General Irvin McDowell personally thanked them for their gallantry.

The Irish Brigade was an infantry brigade, consisting predominantly of Irish immigrants, that served in the Union Army in the American Civil War. The designation of the first regiment in the brigade, the 69th New York Infantry, or the "Fighting 69th", continued in later wars. They were known in part for their famous warcry, the "faugh a ballagh", which is an old Gaelic phrase, fág an bealach, meaning "clear the way".

Captain Meagher evoked the name of Fontenoy that day to inspire his men, a name of deep significance to every Irish soldier. At that place, in 1745, French General Maurice de Saxe triumphed over the British, a victory owed to an unstoppable bayonet charge by the French army's brigade of Irish exiles. Throughout its long history this brigade performed many such feats of courage, and though its beginnings date back to a time of more than one hundred-seventy years before Bull Run, its deeds were fresh in the minds of the men of the 69th New York.

This is a flag that is rich in history. It is also so very unique.
Posted by Steve Berger at 8:46 PM No comments: 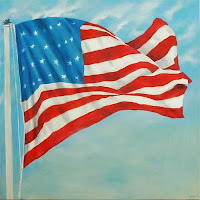 This flag was painted after visiting Historic Fort Snelling. The flag setting is fantastic because it is on the Fort Snelling grounds and the fort has been painstakingly rebuilt to reflect the 1840's period of its existence. It is done very well and I hope to paint more scenes of the fort and its buildings.

This flag is mounted on a ships mast. The reason being was the only way soldiers at the fort knew how to make a flagpole was to mimic what they knew how to build. Most at one time or another were on ships and the mast of ship was used to hoist a flag. So they built a mast and it is still there today being used. I am sure there is no ship buried under the mast but it did cross my mind when I first saw the pole at the site.

This is another large 4'x4' painting. I departed from the muted colors of the other flags of this series for a change and am instead relying on the bright colors for visual impact. Smaller prints are available. Please contact me at steve@bergerfinearts.com if interested in purchasing.
Posted by Steve Berger at 10:05 AM No comments:

B17 Flying Through Clouds 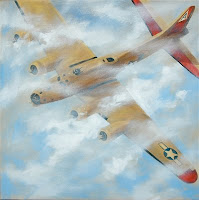 I recently attended an air show with my youngest son where we had the honor to meet two surviving pilots of the Doolittle air raid on Tokyo. I will post that encounters details, pictures and conversations when I finish the sketch I am doing of the plane that helped these pilots become legends. Really was neat to meet them, both of which are in their 90's.
At this show my son and I encountered a working Boeing B-17 bomber from world war II. We climbed into it and toured the entire plane. I was able to take some pictures and from that was able to paint the attached art you see here. There are more paintings that I will do of this plane. It was a fun way to spend a summer Sunday with family and the best way to do research for painting accurate details. I still have not figured out how the tail gunner on this plane got in and out of his spot. If anyone out there knows about that please feel free to email me.
This painting "B-17 In The Clouds" is now available. The original is a 4'x 4'. A Single Order Signed/Numbered Print with a 40”x 40” Image area is $620.00 A 16” x 16” Image Area. Final Print Size 18”x18” cost $350.00. Email me at steve@inposition.biz if interested in owning this print.
Posted by Steve Berger at 9:54 AM No comments:

Labels: B17 Flying Through Clouds Painting 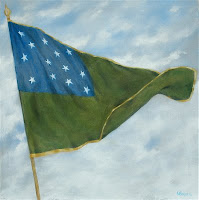 Finally, I finished the "Green Mountain Boys"flag. This flags history began with a very determined patriot named Ethan Allen. This post may be rather lengthy but I love the history behind this flag. After settling in Bennington Vermont, Allen became prominently involved in the struggle between New York and New Hampshire for control of the region. Following rejection by the New York authorities of an appeal that the region be established as a separate province, Allen organized a volunteer militia, called the Green Mountain Boys, to resist and evict proponents of the New York cause. He was thereupon declared an outlaw by the royal governor of New York. This was by all measures the beginning of an interesting collection of individuals. In painting this flag I noticed that there really is no pattern arangement for the stars on the flag. I am looking to see if they are part of a constellation or if there is a significance to the arrangement of the thirteen stars.

At the outbreak of the American Revolution, Allen and his force offered their services against the British. On orders from the Connecticut legislature, Allen, and the Connecticut soldier Benedict Arnold, with a contingent of the Green Mountain Boys captured Fort Ticonderoga early in the morning of May 10, 1775. Allen demanded surrender from the British commander "in the name of the Great Jehovah and the Continental Congress." Subsequently, as a member of the army of General Philip John Schuyler, he rendered valuable service in the American military expedition against Canada. He was taken prisoner near Montréal in September 1775 and held in confinement until exchanged in 1778. Following his release by the British, he returned to his home and was commissioned a lieutenant colonel in the Continental Army and major general of militia.Noted in a previous post The Green Montain Boys helped helped win the Battle of Bennington in Vermont.

The Green Montain Boys repeatedly harassed New Yorkers and, after the war, declared Vermont an independent republic. In 1778 Allen appeared before the Continental Congress in behalf of a claim by Vermont for recognition as an independent state. With his brother Ira Allen and other Vermonters he devoted most of his time thereafter to the territorial dispute. He negotiated with the governor of Canada between 1780 and 1783, ostensibly to establish Vermont as a British province. On the basis of this activity he was charged with treason, but, because the negotiations were demonstrably intended to force action on the Vermont case by the Continental Congress, the charge was never substantiated. He wrote a Narrative of Colonel Ethan Allen's Captivity (1779). Allen died in Burlington, Vermont, on February 12, 1789.

When New York relinquished its claims to the land, Vermont applied for statehood and in 1791 became the 14th state. It would have been interesting to meet Ethan Allen and discuss his views of George Washington and the forming new Republic.
Posted by Steve Berger at 8:19 PM No comments: