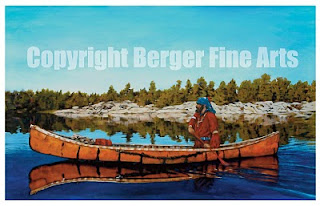 This is the latest of the Fort Snelling works I have produced. This scene depicts a Voyager in his element. I may have a couple of changes to this painting. The original measures 36" x 27" and is an acrylic on canvas. If you would be interested in prints email me at steve@bergerfinearts.com
Posted by Steve Berger at 9:05 AM No comments:

Labels: Voyager in his element 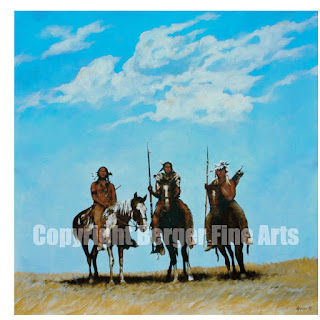 This is a finished view of an original painting I did some time ago. I wanted to do something with the clouds in the sky and I thought adding an eagle would be interesting. I wanted to paint it so it would be immediately noticeable. Can you find it? This painting is part of the Fort Snelling series and is now finally finished. Prints are available just email me at steve@bergerfinearts if interested.
Posted by Steve Berger at 9:01 AM No comments: 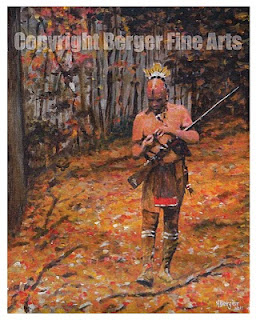 This painting is part of the Fort Snelling series I have been doing. I wanted to capture what it would be feeling like in the woods near the fort. Since it is near the Mississippi River there are steep bluffs, many ridges and trails and lots of color. This painting reflects a typical day for a Native American who is checking out his collection of flint arrowheads to maybe be re-purposed as flint for his newly acquired gun. It is just another walk in the woods near the fort.
Posted by Steve Berger at 8:52 AM No comments: 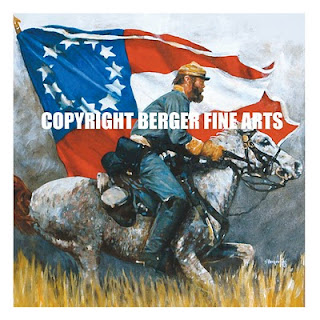 One of the the first national flags of the confederacy is depicted here. I wanted to add something more to this piece rather than just show the flag by itself. After doing some research I discovered that the flag design as well as the design styles of the uniforms of the newly formed southern army had a design link. This is what made the painting shown here an
interesting combination of visual history.

This initial Confederate States flag was designed by a Prussian artist named Nicola Marschall. Mr. Marschall also designed the confederate uniforms we all have become familiar with that use the grey, yellow and blue color combinations used by the armies of the south during the Civil War. Mr Marschall lived in Marion Alabama at the time of this design and must have been active in other design endeavors during his lifetime which I would like to research to find out more.

Mr. Marschall's assignment to come up with a new flag also included a design requirement set by the provisional Confederate Congress that the new flag was to be similar to the"Stars and Stripes" flag used by the north.

Nicloa's design challenge was then can he make the C.S.A. flag different enough using the same combinations of colors, stars and stripes that the U. S. flag incorporated to stand on its own visual merit. Mr Marschall's design did indeed succeed in winning the newly formed governments approval. His unique combination of the elements required by the Congress made a beautiful visual statement that went on to represent the Southern government and was soon referred to as the "Stars and Bars"of the south.

Nicola's flag design was rapidly approved on March 4th 1861 and was shown first publicly at the Ben Johnson house in Bardstown Kentucky. It eventually made its appearance over the confederate capital dome later in the year.

A special note that the initial flag design had only had 7 stars not the eleven star flag depicted here in this painting. As the war progressed and more states fell into the confederacy more stars were added. The eleven star was added July 2nd 1861 and stayed until two more final stars were added November 28, 1861.