We The People Painting 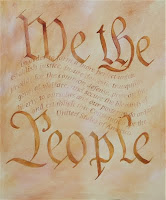 It has been a while since I stretched my lettering skills. After doing some watercolor studies which I posted earlier, I thought doing a canvas painting would be a nice touch to the American flag series already produced.

This original painting measures 2'x3' on canvas. The colors are meant to blend with the other paintings in the American Flag series but I think it stands on its own merit as a single display piece.

The calligraphy flowing in a free form like this gives life to the words of the Preamble to the Constitution. By putting them in free flowing rows they begin to represent the stripes of a flag catching a nice breeze.

I wanted to make the words of the Preamble beautiful to look at as individual strokes as well as impact-full and alive when viewed as a whole image with the original typeface featured on the original Preamble "We The People".

Smaller signed Giclee prints of this painting 12"x12" will be offered for $200.00 each if ordered through Berger Fine Arts. Email (steve@bergerfiinearts.com) if interested in purchasing.
Posted by Steve Berger at 7:31 AM No comments:

Labels: We The People Lettering Art 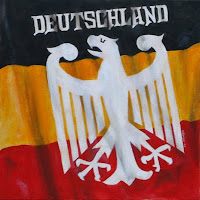 After seeing the Irish Brigade flag I was approached to do a German flag for an office enviroment. Take a look at the lettering. Not only is this font style fun and unique but it just looks splendid when combined with the other elements in this image.

I wanted to combine the German flag colors with a traditional German Icon of the eagle to convey the old with the new Germany in one image. This 2'x2' image is meant to make a bold statement in any room.