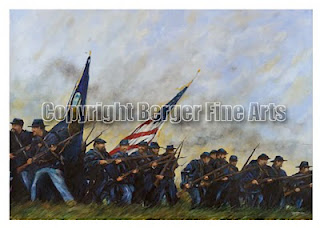 I have finally finished this painting "The Spartans Of Gettysburg" after about 7 variations. I wanted to capture the moment at Gettysburg when the First Minnesota Volunteers all 262 of them were ordered by General Hancock to charge down a hill into 1,800 Alabama soldiers moving up the hill. General Hancock needed time to rush in reinforcements to counter the 11000 man force forming behind the Alabaman's that were rapidly moving into positions to flank the Union lines -- "five minutes time," he'd write later. So he ordered Col. William Colvill and his men to charge the larger Rebel force to gain time to get his reinforcements into position.

“Every man in the first Minnesota realized in an instant what that order meant; death or wounds to us all, the sacrifice of the regiment, to gain a few minutes’ time and save the position and probably the battlefield," wrote Lt. William Lochren of the First Minnesota. Though the Minnesotan unit was outnumbered five to one they did not hesitate and lunged forward with fixed bayonets in a spectacular charge that could in all fairness be called suicidal.

The Alabamans were disorganized and winded after charging nearly a mile, and the sudden attack by the small group of Minnesotans caught them off guard. The Confederates were momentarily thrown back; but they regained cohesion, and then delivered staggering fire into the Yankees.

"I would have ordered that regiment in if I had known every man would have been killed," Hancock wrote. "It had to be done."

"They had not taken the Alabama flag, but they had held on to their own,' Historian Shelby Foote wrote. "And they had given Hancock his five minutes plus five more for good measure."

The Next Day the First Minnesota Helped Repel Pickett's Charge
Decimated as it was, the First Minnesota was not finished fighting at Gettysburg. Two companies that had been detached from the regiment, rejoined the unit, bringing the numbers back up to 150 men. On the third day of the battle, the Minnesotans were called in to help smother Pickett's Charge -- the climatic Confederate attack led by Gen. George E. Pickett. The First Minnesota suffered 45 more casualties, but Pvt. Marshall Sherman managed to capture the colors of the 28th Virginia. This flag which I have seen is today at the Minnesota History Museum.

This acrylic painting measures 24"x 36" and the original is still available. Signed Giclee prints with an image size of 20" x 15.5" are available for $250.00. Other sizes are available with framing options. Email me at steve@bergerfinearts.com if interested.
Posted by Steve Berger at 7:29 AM No comments:

JFK Poster Go Ahead and Call Me a Liberal 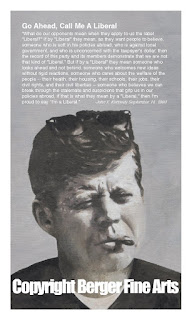 Well you can sure tell its election time. A lot of interest in this print with the included speech from JFK dated September 14th 1960.

So here it is a limited edition run of this 17" and 3/4" x 26" image area only Giclee print for $125.00. Each piece is signed and numbered and is guaranteed to be a draw in any room it occupies. If you need framing options please let me know and I can show you and price a style that fits the piece.

Email me if interested in ordering prints or framing options at steve@bergerfinearts.com
Posted by Steve Berger at 6:22 AM No comments:

Labels: Go ahead and call me a liberal JFK poster 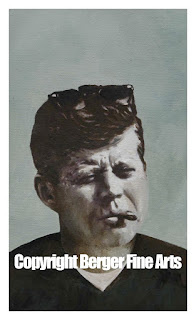 After Painting sports legend Vince Lombardi and Marilyn Monroe the famous screen actress I had to finish the famous celebrity series with a political icon.

JFK was a natural choice for me, Abe Lincoln was close and I actually started one of Abe but with the Marilyn Monroe connections and the lack of JFK portraits in a natural setting like this the choice was made much easier for me. I will finish Abe later and post here.

This JFK original measures 18" in length by 9" wide and is painted in colors that reflect the other two paintings in the series. The image painted I think fits the personality of JFK and his tone of politics. If you are looking for a series of original art to finish off a media room or entertainment area this is the series that will always draw comments.

This image is for sale and signed limited edition Giclee prints are available at the original size for $180.00. Email: steve@bergerfinearts.com to order.
Posted by Steve Berger at 6:51 AM No comments: 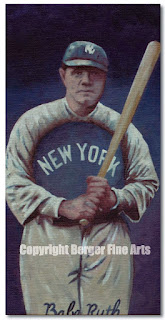 After a disappointing sweep of the Twins by the New York Yankees I was compelled to paint this picture of Babe Ruth. Read into it what you will. This image is slightly cut off at the bottom but signed Giclee prints are available of this 7.50x15" acrylic painting for $125.00. Mailed in a shipping tube this print is sure to bring comments to any room. Allow a week for delivery. Contact: steve@bergerfinearts.com for orders. Visa & MasterCard accepted.
Posted by Steve Berger at 6:36 AM 2 comments: