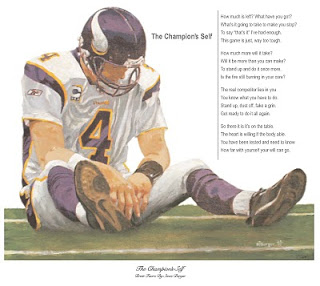 Champions
This is a new painting I just had to do after the 2010 Minnesota Viking season ended. It is based on a picture I saw of Brett Favre on the ground during the Saints playoff game. All I could think of is what must be going through his mind in the final minutes of the game. So the poem goes with the painting on what a champion must be thinking about. When it is all said and done and the game is over, after you have done your best and you are out of time how do you will yourself and what thinking process must a champion like Favre go through to do it again.

I have made signed and numbered Giclee prints of this painting and they are available for $125.00 each. Free shipping of course. If you would like one email me at: steve@bergerfinearts.com and be sure to include your contact information.

I enjoy camping in the Boundary Waters canoe area during the course of the year and the wolf population has enjoyed a healthy return. Though we do not see them in the evenenings we hear them conversing during the night. We also see their tracks in the daylight while fishing and enjoying shore lunches.

This painting was inspired by a visit to Lake Saginaga and I wanted to convey the vastness of the night with a wolf running across a frozen lake Saginaga with his shadow mirroring his gallop. Prints of this painting are available. Signed 14" x 34" prints on canvas are available of this painting for $125.00. Email steve@bergerfinearts.com if interested in purchasing.
Posted by Steve Berger at 2:34 PM No comments: 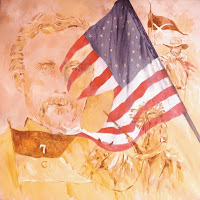 George Armstrong Custer and the battle of Little Bighorn is still a fascinating event in American history for me. It was a watershed moment on so many levels that I continue to read every thing I can get my hands on that involves the events of that day in history.

I have painted Custers Personal flag which he carried in the later days of the Civil War and still survives today. This is because he did not bring it to the battle of little Bighorn but left it at the fort Abaham Lincoln. I have wanted to paint the 7th cavalry company colors as shown in this painting for some time and here it is.
Signed 16" x16"prints of this painting are available for $80.00. Email me if you are interested in a print. steve@bergerfinearts.com
Posted by Steve Berger at 2:21 PM No comments: 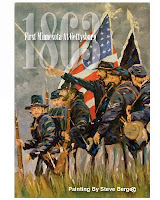 Here is a recent oil painting of the first Minnesota's role at Gettysburg. I usually paint in Acrylic but I thought it was time for an oil painting. If you understand the history of the Minnesota First at Gettysburg it is nothing less than awe inspiring. The men of the 1st Minnesota are most remembered for their actions on July 2, 1863, during the second day's fighting at Gettysburg, where the regiment prevented the Confederates from pushing the Federals off of Cemetery Ridge, a position that was to be crucial in the battle.
Maj. Gen. Winfield S. Hancock, commander of the II Corps, ordered the regiment to assault a much larger enemy force (a brigade commanded by Brig. Gen. Cadmus M. Wilcox) telling Col. William Colvill to take the enemy's colors. The fateful charge bought the time needed while other forces were brought up. During the charge, 215 members of the 262 men who were present at the time became casualties, including the regimental commander, Col. William Colvill, and all but three of his officers.
The unit's flag fell five times and rose again each time. The 47 survivors rallied back to General Hancock under the senior surviving officer, Captain Henry C. Coates. The 83 percent casualty rate stands to this day as the largest loss by any surviving military unit in American history during any single engagement. The unit's flag is now in the Minnesota Capitol's rotunda.
Despite the horrendous casualties the 1st Minnesota had incurred, it continued the fight the next day, helping to repulse Pickett's Charge. The surviving Minnesotans just happened to have been positioned at one of the few places where Union lines were breached during that engagement, and, as a result, charged the advancing Confederate positions one last time as a unit. I have had the honor of viewing (see previous blogs) the captured Virginia battle flag captured by the Minnesota First during Picketts charge which currently resides at the Minnesota Historical Society. I have painted my versions of the Virgina flag and it prints are available..
Posted by Steve Berger at 2:07 PM No comments: 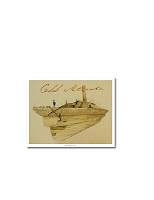 Well it has been awhile since my last post and I have a lot to catch up on. I have a series of Ironclad ship paintings that I have put the finishing
touches on. The first is the CSS Atlanta. The view I chose for this painting was one from the bottom up that shows how the boat was constructed. It is very hard to find information on these ships which makes them fun to paint after the research is done. The CSS Atlanta, was a 1006-ton ironclad ram, and was originally built in Scotland in 1861 as the merchant steamship Fingal. In November 1861 she ran the blockade into Savannah, Georgia, with a large cargo of weapons and military supplies. After Union forces closed the exits from Savannah, preventing her further use as a blockade runner, Fingal was converted to an casemate ironclad and renamed Atlanta. She made her first appearance as a Confederate warship in mid-1862.


Atlanta made two efforts to attack Federal warships blockading the coast and rivers leading to Savannah. The first, in early 1863, was thwarted by obstructions blocking the route to the sea. In June 1863 Atlanta made her second attempt, targeting blockaders in Wassau Sound. There, on the 17th, she encountered the U.S. Navy monitors Nahant and Weehawken. In a brief battle, Atlanta went aground and was overwhelmed by Weehawken's superior firepower, forcing her to surrender.

The captured ironclad was taken into the Union Navy as USS Atlanta, commissioning for service in February 1864. She was stationed on the James River, Virginia, to support the operations of the army under General Grant. On 21 May 1864, she fired on Confederate cavalry that were attacking Fort Powhatan. A year later, with the Civil War over, Atlanta went north and decommissioned at Philadelphia, Pennsylvania, in June 1865. After several years "in ordinary", she was sold in May 1869. Reportedly, she subsequently became the Haitian warship Triumph and disappeared at sea off Cape Hatteras in December 1869.
Posted by Steve Berger at 1:54 PM No comments: